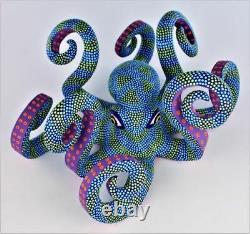 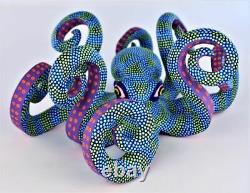 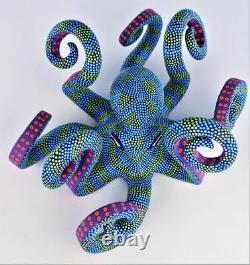 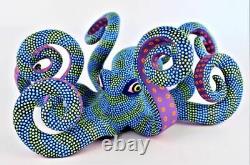 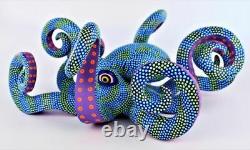 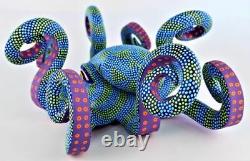 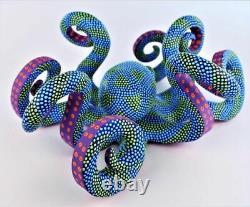 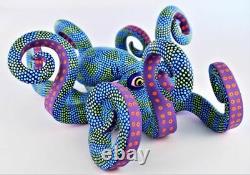 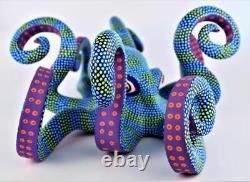 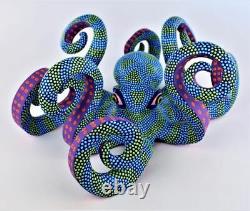 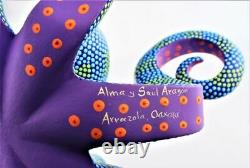 This is my favorite wood carving from Saul and Alma Aragon, and the one that I look to as their signature piece. We are so excited to be able to actually feature it here on our website. It normally sells out at our museum shows before we ever get a chance to list it. We met this wonderfully talented couple on one of our last trips to Oaxaca, and we are so excited to now carry their spectacular wood carvings! Saul and Alma are from Arrazola, a beautiful town just outside of Oaxaca City, and the village that many would call the birthplace of the Oaxacan Wood Carvings.

Arrazola is located close to the famous ruins of Monte Alban and the newly opened ruins at Atzompa. The area is rich in history and tradition, and you can readily see the traditional patterns displayed prominently in the designs of Saul and Alma. The family has been carving these fantastic pieces since the 1980's, and their expertise really shows. Although paying homage to the traditions of the past, Saul and Alma are always looking towards the future as well.

Saul is the President of the EcoAlebrijes Association, a cooperative of fifteen families from Arrazola that are committed to respecting the natural resources used in their work, and protecting the future of the copal trees from which the carvers craft these fantastic creatures that we all love so much. We especially love their reforestation projects!

This octopus is full of whimsy and special creative details.. Perfect in both the actual carving and the painting. It has such a spectacular and hard to achieve sense of movement in the wild tentacles flying through the air in circular movement!! And the painting technique is full of a wonderful texture with raised painted circles in a burst of cheerful color! I just cannot say enough good things about this spectacular carving!

Oaxacan wood carvings start out traditionally with a piece of Copal wood, either a piece of the trunk, or one of the magnificent branches of the tree. The Copal wood is a soft wood that is similar to a balsa wood, but the Copal is indigenous to Southern Mexico. After the animal wood carvings from Oaxaca became extremely popular, the Mexican government stepped in to control the supply of the wood, and even created a biosphere to preserve the species. Artists are no longer able to cut trees down though, and must pay increasingly higher prices to obtain a supply of this wood from authorized dealers who maintain a cap on the supply.

Currently many artists recognize the importance of preserving these trees, and have communal programs in the villages to replant the Copal, since the tree actually takes about 25 years to mature. The Copal tree takes on a cultural and religious significance in the community as well, since the sap of the tree is used for making incense that is often valued for its ceremonial usage.

The figures are first carved while the wood is green, and the artist is able to carve out fantastic details since the wood is so soft. Other wood can be used, so at times you will find cedar or pine, but Copal is the most commonly used wood.

The rough outline is done with a large machete, and the positioning of the figure is often determined by the shape of the piece of wood that is sourced. A carver can take a look at the piece of wood, and envision just what kind of animal they will be able to carve, and how to position it.

Further refinements to the carving are done using gradually smaller rustic knives, usually fashioned locally from whatever is available. After the figure is carved, it is sanded smooth and left to dry. The drying process can take several months if it is a large piece. While it is drying, the wood will often crack, and then the artist will fill these cracks using wood chips and filler, before again having to sand the figure down. The most valuable carvings are often one piece carvings, carved out of a single piece of wood, but you will often find removable parts like tails and ears, that make transporting these a little easier.

A sense of motion in the piece is another sign of quality, as it is also a measure of the degree in difficulty achieved in the particular piece. Twisted bodies, turned heads, raised legs, curved bodies and tails are all indications that an extra amount of work went into the piece of art.

Many of the older pieces were painted with natural analine or coal based dyes, but these often faded over time, so most artists switched many years ago to acrylic paint. With the acrylics, more cheerful colors can be achieved, and the paint is more long lasting. We love the sense of color in these cheerful carvings! Oaxacan wood carvings became commonly referred to as Alebrijes, especially after the movie Coco came out, but the term alebrije actually is attributed to the Linares Family who create fantastical paper maiche figures in Mexico City. The term was widely used in Oaxaca after a joint exhibition that was done where both Pedro Linares of Mexico City and Manuel Jimenez of Oaxaca were present. Manuel Jimenez became the driving force behind Oaxacan wood carvings, and is said to have been influenced by the colors that he saw in the work of Pedro Linares. But the actual term "Alebrije" is actually said to have come to Pedro Linares in a dream about fantasy creatures. There is much debate currently in Mexico about the use of this terminology, and who should have the right to use it. As a result in Oaxaca you will also see the terms Tonas and Nahuales, which refer to spirit animals and mystical creatures that take on both human and animal forms. Another term used is Tallas de Madera, or simply wood carvings from Oaxaca. Popular culture, however, has made it more difficult for the artists not to use the term Alebrije when referring to their carved figures, since more and more people have become accustomed to the terminology. It will be quite interesting to see how this plays out in the future. The item "Oaxacan Wood Carving Saul Aragon Octopus Coastal Oaxaca Mexico Folk Art Alebrije" is in sale since Friday, July 2, 2021. This item is in the category "Collectibles\Cultures & Ethnicities\Latin American\Mexico\Folk Art".

The seller is "scthom1967" and is located in Blaine, Washington. This item can be shipped worldwide.